Calais sits on the narrowest stretch of the English Channel, and has long been the site of the bulk of  trade between the UK and France. Commodities worth some £90 billion pass through the Port of Calais each year.

Technically, the port is owned by the Conseil Regional (regional council). But it is run under a 50 year concession agreement by a semi-private company called Société d’Exploitation des Ports du Détroit (SEPD).

The port is in competition with Eurotunnel, as well as with other ports along the coast. It is currently in the midst of a major five year expansion project (“Calais Port 2015”). Construction multinationals, among them Bouygues and Vinci, are earning big off the port expansion.

Security is a key issue for the port’s competitiveness. in 2015-16, migrants made repeated large-scale incursions into both the port and the tunnel, and an arms race developed as the two sites built ever tougher fences. Some of the measures the port has recently pursued have included the construction of the ‘Great Wall of Calais’; the installation of infrared barriers providing real-time notifications to security officers about potential break-ins; and the employment of private security guards (Eamus Cork Solutions) under a €27 million contract.

The port itself is owned by the Conseil Regional, following a 2007 move towards decentralising port ownership that transferred ownership from the national government. It is administered jointly with the nearby Boulogne port. Management is contracted out under a concession agreement. The management concession was previously held by the Côte d’Opale Chambre de Commerce (see profile here), but in 2015 it was transferred to the Société d’Exploitation des Ports du Détroit (SEPD), a structure specifically created for the new port an expansion project. This is a 50 year concession which began on 22 July 2015. The SEPD now handles all “management, operation, maintenance and infrastructure and superstructure development”.

The SEPD is a majority state owned “Public Limited Company”.

CDC (Caisse des Dépôts et Consignations) is an investment fund / bank belonging to the French government, “the investment arm of the French state”.

Meridiam is a French private sector investment fund manager which specialises in public infrastructure and is close to the French state. Its CEO used to work for CDC.

Port president Jean-Marc Puissesseau used to be president of the CCI Cote d’Opale, for 5 years, but had to choose between his position there and with the SEPD in Sep. 2015, around the time that the concession for the port was transferred from CCI to SEPD. Lawyers questioned the fact that he was simultaneously president of both CCI Cote d’Opale and SEPD, arguing this created a conflict of interests. Puisesseau is additionally president or manager of a number of different companies.

The port’s main goal is to profit and win a larger share of the traffic (both commercial and passenger) between the UK and France. Commercial traffic in particular is on the rise, and the port will need additional infrastructure if it is to accommodate more trucks in the future. Planned port expansions come alongside the Eurotunnel’s similarly titled ‘Terminal 2015’ expansion, through which the company added five new access lanes and a new check-in facility for trucks at its terminal in Folkestone, increasing traffic flow through the terminal up to 300 vehicles per hour. Both the port and Eurotunnel are responding to the UK Government’s announced goal of increasing UK exports almost twofold (in comparison to 2015) to £1 trillion by 2020.

It is also in the port’s interest to lobby the UK, French, and EU government to fund their expansion, which would be difficult to achieve without public funding. By arguing that the port provides an important role as a node in the trans-European flow of trade, the port has been able to secure hundreds of millions of Euros from the French government at various levels, as well as the EU TEN-T program, for its construction projects, and tens of millions more from the UK to cover the costs of security.

Individual people in power, such as Puissesseau, may also have their own personal motivations to achieve wealth and power.

The current port expansion project aims to double the capacity of the current port, behind a massive massive new breakwater. The port says the work should be complete in January 2021, and will cost €863 million. Finance for the scheme is mainly from private sources, both equity and debt investment, but also involves €270 million in public money. Eurotunnel

In more detail, here is the funding breakdown from the SPD website: 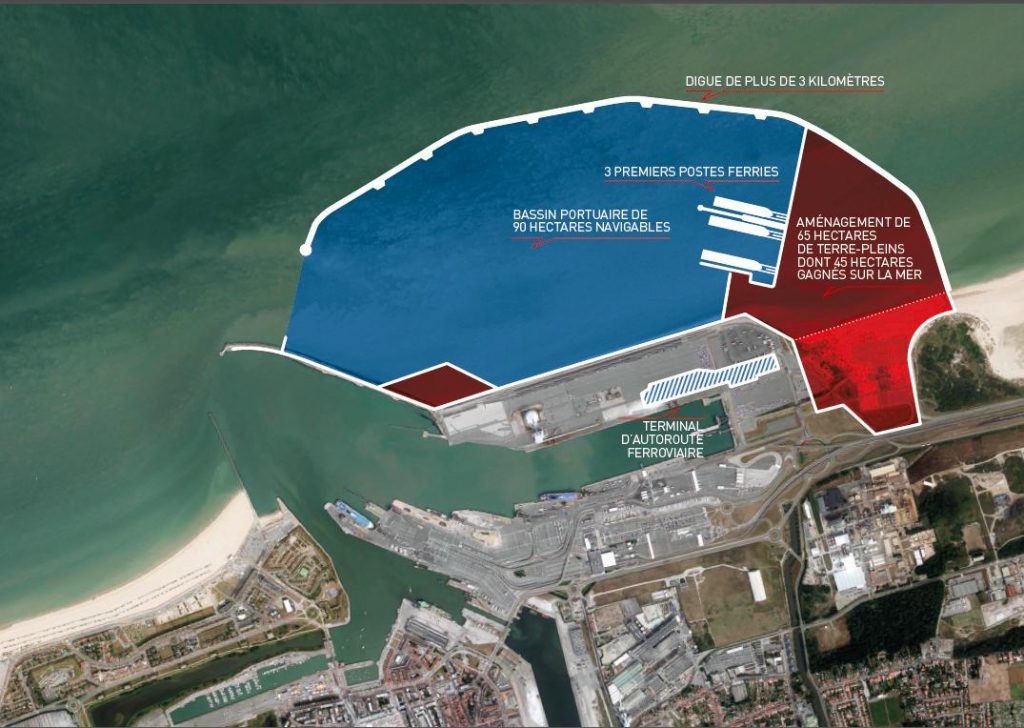 Image: Anticipated expansions of the current port under Calais Port 2015

As well as the massive breakwater and new docks, the expansion involves further infrastructure. This includes a new rail terminal inaugurated in the Calais port in October 2015, a €7.2 million construction linking the port with a 1,400 km line to Boulou on the French-Spanish border. However, the initial January 2016 opening date was pushed back to March after Interior Minister Cazeneuve questioned whether the rail line was secure enough, noting that it passed by the jungle at speeds of 20 km/h with limited security. After it finally did become operational in March, the VIIA service was already interrupted in June due to insufficient security. It resumed service in February 2017, alongside ongoing additional security measures include the installation of €2 – 3 million in additional fences throughout Calais. A further rail transfer logistics platform linking Calais to Central and Eastern Europe was also underway as of March 2017, though the opening date has already been pushed back extensively.

These infrastructure expansions have been paralleled by buffed up security, largely paid for by the UK government. Over the years, the port has benefited extensively from UK funding for security in Calais, receiving tens of millions for high-tech security equipment, the construction of secure lorry zones, and private security guards. Recently, the SEPD oversaw the construction of the “Great Wall of Calais“, which blocks the highway starting some kilometres away from the port. 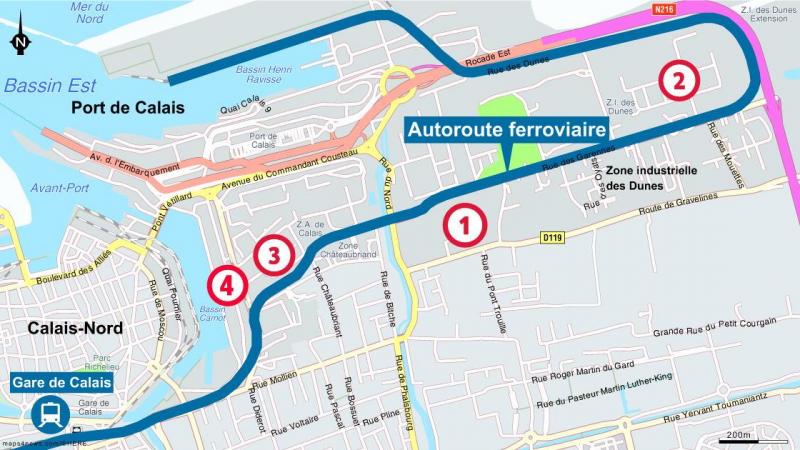 Relations with other key actors

The port expansion and security schemes have government funding from both UK and French states, the Conseil Regional, the Mayor of Calais, and also the EU.

Eurotunnel and the Port of Calais are major competitors. In the 2015-16 security “crisis”, managers from the two companies often spoke out against the other, criticising the support each was getting from the state, which they saw as redirecting migrant incursions towards their own site.

Bouygues, the main contractor for the Calais Port 2015 project, is one of the world’s largest construction companies, and additionally specializes in real estate development, media, and telecommunications. The company relies heavily on public–private-partnership contracts (PPP), including for example hospitals throughout the UK and infrastructural projects throughout Africa. Bouygues has also been at the centre of various controversies, e.g.: