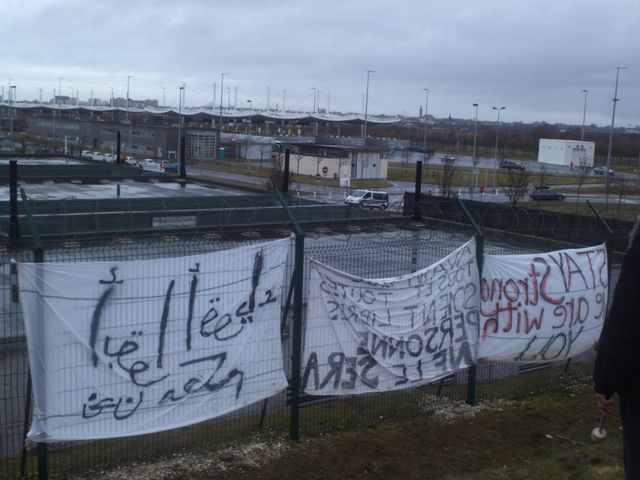 An introduction to the border regime in Calais

Calais is the main port on the south side of the English Channel that separates Britain and France, a key hub for one of the world’s busiest trade routes. In the early 1990s, as the Channel Tunnel was being dug, the governments of Britain and France made an agreement: UK border controls would be shifted onto French soil, and vice versa. This is called the  “juxtaposed controls” arrangement, and its aim is to stop refugees reaching the UK shore and claiming asylum there.

This deal has made Calais a place of misery, as thousands of migrants get stuck trying to cross the narrow waterway to England, and dozens die in the attempt. The UK and French governments have spent millions in an unending escalation of border security around the Port of Calais, Channel Tunnel, and the highways and railways that lead to them. Meanwhile, in an attempt to deter migrants from arriving or staying, the authorities conduct the “Chasse à l’Homme” (“hunt of people”), arresting, beating, gassing and otherwise harassing undocumented people in and around Calais, destroying dwellings and belongings in order to make life unlivable.

On this website we profile and analyse the key actors who maintain this Border Regime, and the contractors who profit from doing their dirty work. This page gives a bit of general background, looking back over some key milestones. 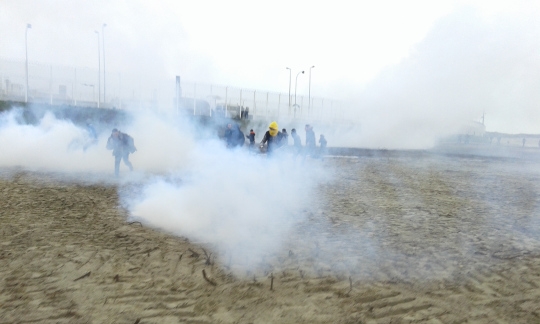 A very brief history of the Calais border system

The UK immigration system is still largely based on one notorious bit of legislation: the Immigration Act 1971. Immigration from Britain’s former colonies, particularly in South Asia and the Caribbean, had been increasing rapidly, leading to anti-migrant backlash from the right. The government responded with repressive legislation promising to “regain control” of migrant numbers. In the decades since, the same pattern has been followed again and again: media whip up panic, politicians promise “tough” new laws.

At the start of the 1990s, for the first time since World War II the UK saw a rapid rise in people arriving to seek asylum. The fall of the Soviet Bloc and conflict in the Balkans were the immediate causes — as well as cheaper travel helping people move more easily around Europe. In 1988 less than 4000 people claimed asylum; in 1991 more than 44,000 people did.

Work on the Channel Tunnel began in 1988, and was completed in 1994. The UK government anticipated a rise in asylum seekers travelling through the tunnel. It addressed this with the introduction of Juxtaposed Controls: i.e., siting UK border checks at the Eurotunnel terminal on French soil (Coquelles), while reciprocally the French had border checks on English soil (Cheriton). Juxtaposed Controls were initially agreed by the two states ahead of the tunnel’s opening in the 1991 Sangatte Protocol. In 2000 the arrangement was extended to cover Eurostar passenger train terminals (the “Additional Protocol”). In 2003 the Le Touquet treaty also brought juxtaposed controls to the ferry ports at Calais and Dunkerque. in 2004 Belgium also signed up, bringing UK border checks to Brussels Midi station.

Since the introduction of juxtaposed controls, the border in Calais has been increasingly secured to prevent “clandestines” from bypassing the off-shored border checkpoints and making it across the channel to claim asylum in the UK. This security has involved: increasingly strong fencing at both tunnel and port sites; increasing police and border force presence in and around the tunnel and ports; increasing numbers of private security guards; increasing use of technologies. 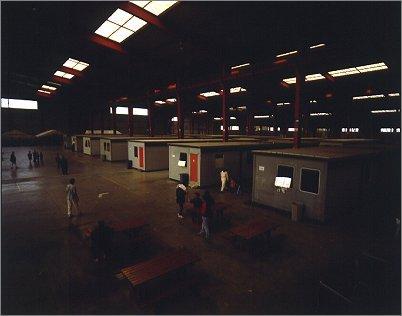 image: inside the Red Cross camp at Sangatte, 2001

The bursts of new security measures have almost invariably followed UK media panics. A notable wave of panic and securitisation of the border occurred in 2000-2003. In September 1999, the Red Cross opened the Sangatte camp to house at first several hundred, but eventually well over 1000, refugees clustered at the border. They were largely Iraqis (particularly Kurds) and Afghans. Starting in 2000 and escalating, the UK tabloid press ran a succession of stories highlighting the “siege” of migrants based at the camp and trying to cross. In response, the first fences went up at the port in 2000, then at the tunnel in 2001. The Sangatte camp itself was closed in December 2002, by order of the French state on the demand of the UK state.

image: demonstration against the eviction of the Pashtun jungle, October 2009

Of course, this did not “solve” the problem of Calais. What it did achieve was to make it less visible: migrants became scattered into precarious squats and jungles, under continual attack by police deployed especially to make conditions miserable. In September 2008, the CFDA’s “Loi des Jungles” report stated:

“The authorities deploy incredible resources to monitor, stop and expulse exiles from the Calais region : The security systems set up, such as in Calais’ port, to stop people from getting onto lorries, cost some 12 million euros a year. The regular patrols, sophisticated technology, and constant reinforcement of fences have not prevented illegal crossings but do lead to about 30 people being intercepted a day. In Calais, 530 policemen are dedicated exclusively to fighting illegal immigration while the number of exiles in town varies from 200 to 600.”

That number was about to start growing again, as a new major settlement started to develop — the Pashtun “Jungle”. And, again, the UK media took notice and a new run of tabloid horror stories began, focused now on the Jungle.

As Calais returned to the media radar, once again the UK state demanded new measures. It got its way with the July 2009 signing of a new “Administrative Arrangement”, effectively ramping up the Le Touquet procedures. The UK committed to providing “latest detection technologies” at the crossing points operated by Border Force staff. France agreed to provide more policing targeting and dispersing migrant clusters around the crossing points, and increase deportation flights. The controls were also extended to the port areas of Dunkerque and Boulogne sur Mer along the coast. France also came through with a visible display of its new commitments by evicting and destroying the Jungle in September 2009. 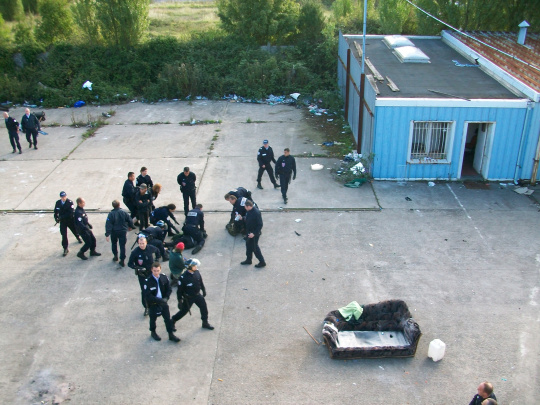 Once again, the dispersal of around 800 people from the Pashtun jungle didn’t make any long term change, and people returned to Calais over the next weeks and months. The state would not allow another major camp to grow up, forcing people again to hide in small clusters in the woods, or to squat in the town’s many empty buildings. Some of the largest settlements of this period were the several squats in abandoned factories that went by the name of “Africa House“, occupied by Sudanese, Eritreans and others.

In 2013 and 2014, a number of other building occupations were opened and defended by members of the Calais Migrant Solidarity network, including a house only for women and children on Boulevard Victor Hugo. In response to this growth of solidarity initiatives in the town, the government was pushed to create the first official facility with women’s accommodation and other facilities since the Sangatte camp, the Jules Ferry centre. This was six kilometres out of town: again, the strategy was to keep migrants invisible and segregated from the “native” population. 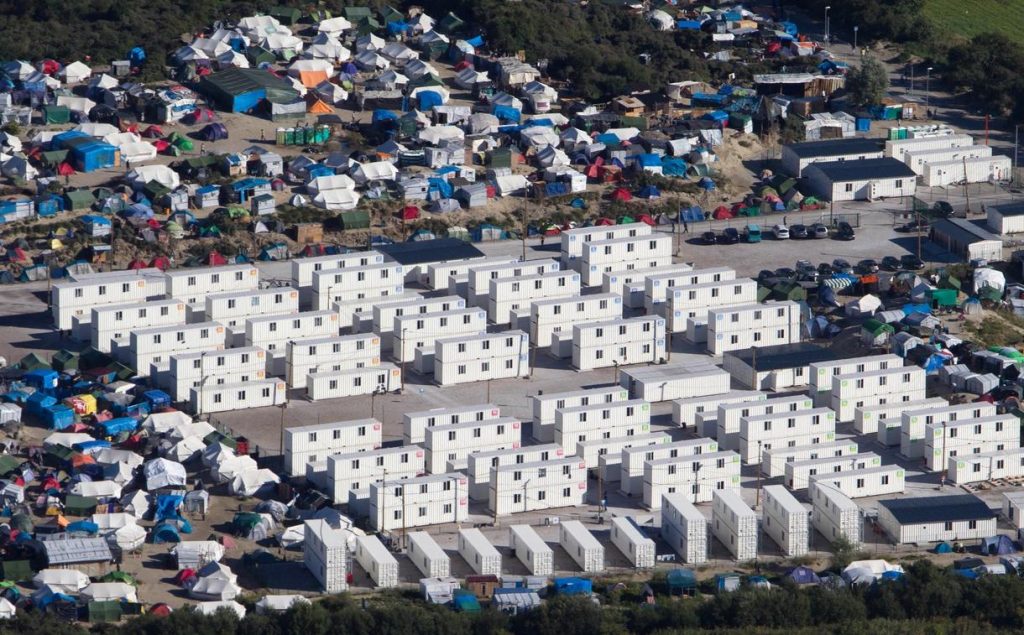 image: the big jungle and container camp in 2016

Then came the “refugee crisis”. That is: after the tragic repression of the “Arab Spring” the numbers of refugees fleeing Syria, East Africa and other desperate regions grew into the millions. While the majority have ended up in the camps of Turkey or North Africa, some headed for Europe through Greece or the Mediterranean, and a minority of these aimed for the UK.

In Calais, this meant the number of migrants stuck at the channel border from under a thousand in 2014, to 8,000 or so by the end of 2016. Set against three million Syrian refugees in Turkey this is nothing; but on the tabloid front pages and TV screens it was a mass invasion, a terrifying existential threat.

When the increased numbers met the Calais border, this meant large groups taking more concerted and high-risk steps to break through, including mass incursions into the port and channel tunnel. The governments and corporations responded accordingly with new fences (and eventually the “Great Wall of Calais”), a private security army for Eurotunnel, and thousands of riot police drafted to patrol the tracks and roads.

To contain the new arrivals, and keep them away from central Calais, the French authorities permitted a new mass settlement to grow around the Jules Ferry centre. This was partly officialised with the creation of a fenced and guarded “container camp”. But as media refocused on the Jungle, replaying the same stories from Sangatte 2002, switched tack once again with a spectacular mass eviction and clearance in October 2016. 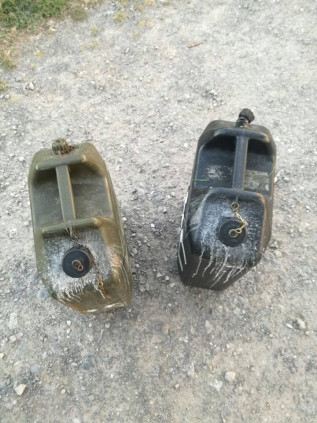 Calais seems to be running on a seven year cycle, with big media frenzies and clearances in 2002, 2009, 2016. After each clearance, some people are imprisoned, some given asylum, and the majority dispersed across France without any permanent solution of their case. Then people gradually trickle back to Calais.

At the end of 2017, there are again several hundred migrants stuck in Calais trying to cross. Police numbers remain escalated, with orders to break up any growing settlement. The migrant hunt is on full strength, and even charitable food distributions are being shut down with tear gas. Due to the increased security measures, the channel crossing is harder than before 2016. But it is still there, and people will keep coming.