The current Calais border is shaped by the system of “Juxtaposed Controls”, under which UK border controls are exported to the French side in order to prevent asylum seekers reaching British soil. This arrangement, which developed in the 1990s with the Channel Tunnel, is much more beneficial to the the British government than the French. It is the reason for the intense securitisation of the border at Calais since the 1990s, which is mostly pushed and largely paid for by the UK.

The UK Government acts directly in Calais, e.g., its Border Force guards control border security within the Port. It also acts indirectly through other actors, e.g., by putting political pressure on France and by funding controls carried out by Eurotunnel and the French authorities. 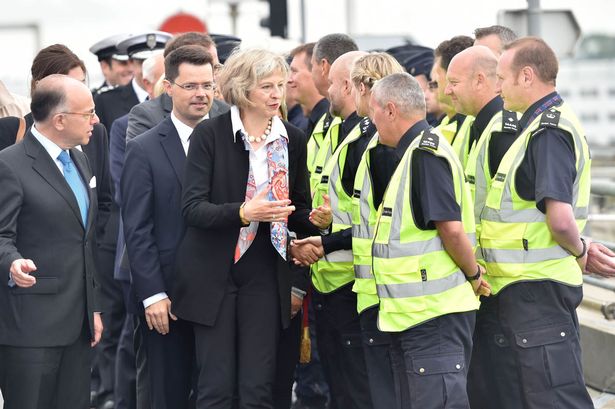 image: Theresa May meets UK Border Force officers in Calais in 2016. (She was then home secretary, and is accompanied by her then French counterpart Bernard Cazeneuve).

The UK Government is led by a Prime Minister and Cabinet of ministers, responsible to a Parliament of elected members (MPs) plus appointed Lords, and backed up by a permanent bureaucracy organised into “government departments”. The Prime Minister is generally the leader of the party which gets the most MPs elected in a General Election, held every four to five years. The department directly responsible for border control is the Home Office, equivalent to the Interior Ministry in France and other countries, led by a minister called the Home Secretary.

For the last century, elections have alternated between the two major parties, Conservatives (centre-right) and Labour (centre-left). There is very little to distinguish in immigration policy between the two, and basically UK immigration controls have been on a path of continual escalation since the 1970s: both parties respond to periodic media anti-migrant panics with new controls, competing to show that they are “tougher”.

Currently, the UK government is run by the Conservative Party, under prime minister Theresa May. She was previously Home Secretary in the government of David Cameron, who resigned in 2016 following the Brexit referendum. The current Home Secretary is Amber Rudd. Under her is the Minister of State for Immigration, currently Brandon Lewis MP. 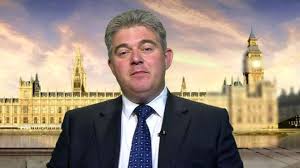 Parliament and the “loyal opposition”

The government must get the approval of Parliament for new laws, and some other major decisions. Parliament is comprised of two chambers: the House of Commons, made up of MPs elected by local constituencies; and the House of Lords, made up of people appointed by the parties. MPs may also raise issues in Parliament, e.g., local Kent MPs may ask questions or propose policies relating to Calais.

The Home Affairs Committee (HAC) is a committee of MPs from all parties whose job is to monitor and ask questions about Home Office policy and actions. It has been responsible for some scrutiny of more obvious “abuses” at the border. But it remains very much on the same line: the border must be sealed, but ideally done whilst appearing to be humane. Until a 2016 scandal it was chaired by Labour MP Keith Vaz, who visited Calais twice.

Governments may face opposition in Parliament from rival parties, and sometimes also rebels within their own parties. The main opposition party, Labour, is now headed by a left-winger, Jeremy Corbyn, who is theoretically more migrant-friendly than previous Labour leaders. His ally and shadow Chancellor (finance spokesperson), John McDonnell, is MP for the constituency where the Heathrow Airport detention centres are sited, and has been genuinely supportive of migrants in detention.

But as politicians, these left-wingers don’t let their personal sympathies get in the way of their political imperative. In fact the party’s May 2017 election manifesto criticised the Conservative government for not being tough enough on borders, and made just one immigration policy promise: to increase the number of border guards by 500.

Meanwhile, the right populist UKIP party, which is strongly anti-migration as well as anti-Europe, is seen as a rising threat by both the two main parties, who generally respond by embracing its populist rhetoric themselves.

In the UK system, border and immigration controls are part of the remit of the Home Office (equivalent of other countries’ Interior Ministry). Home secretaries come and go, but the many layers of Home Office bureaucrats are more permanent and have their own agendas.

Over the years there has been continual re-organising and re-branding of immigration bureaucracy. From 2008 until 2012, all borders and immigration functions were controlled by a semi-independent Home Office division called the “UK Border Agency” (UKBA). Currently, there are three separate Home Office “directorates” concerned with immigration – although in practice these work closely together and are collectively quite separate from other parts of the Home Office. The three directorates are: UK Visas and Immigration (UKVI), which processes “legal” entry applications; Immigration Enforcement (IE), which polices immigrants within the country, e.g., carrying out raids; and Border Force (BF), which runs controls at the frontiers. All three have their headquarters in Lunar House, in Croydon. This has been the HQ of UK immigration controls since 1972. 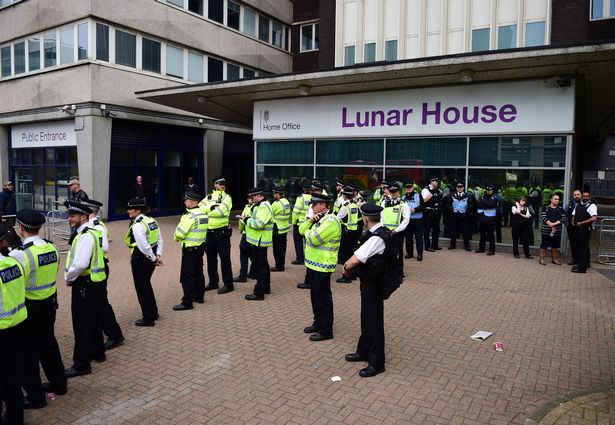 This is the Home Office directorate responsible for monitoring and policing the UK’s external borders. It is divided into 5 regions: Central; Heathrow; North; South; and South East & Europe. Calais falls under the last named. The regional HQ, where BF offices working in Calais are based, is Martello House in Folkestone. (Shearway Road, Shearway Business Park, Folkestone, CT19 4RH).

In Calais, Border Force officers are stationed inside Calais Port, where they oversee the main controls for all passenger and freight vehicles heading to the UK. BF and PAF liaise inside the port, sharing a joint control room. There are also BF officers working with Eurotunnel inside their complex.

For the politicians, we can perhaps identify two major, but conflicting, drives. On the one hand, there is an underlying basic economic imperative: keep trade flowing across the Channel. On the other, the immediate political goal is to seem “in control” of the border.

Perhaps above all, politicians seek to project an image of strength and control. In reality, border controls are always porous and continually fail to achieve their stated targets. The state will never have sufficient resources to fully “close” the border; and there is always a trade-off between controlling “illegal” flows and not impeding too much on desirable trade. But perhaps what matters is just to project an appearance of control: in practice, reacting to recurrent panics about “swarms of migrants at Calais” by being seen to take “tough” measures to re-establish control.

As for the civil servants and border guards who enact policy, perhaps what matters most is to be seen as efficient and effective, to get promoted etc. Senior civil servants will be the ones who have to juggle financial constraints, competing budget demands. On the frontline, Border Force guards may just want to get through the working day.

The juxtaposed control system is clearly much more important to the UK government, as the flow of “illegal” migrants is very largely one-way from continental Europe. On the other hand, the cost – in several senses – of securing the juxtaposed borders is clearly much higher on the French side. So how does the UK government keep the French government on board with the deal? Here are four basic ways, all of which we can see in Calais:

Inside the Port, UK Border Force are largely responsible for border security themselves. Checks are carried out by (a) Border Force staff directly; and (b) contracted private security overseen by Border Force, now provided by Eamus Cork Security (ECS). Border Force maintain holding cells where they detain illegal migrants apprehended at the port, before handing them over to the PAF. The holding cells are now also staffed by ECS; previously another company, Tascor, was contracted to do this. BF, PAF, and port security also liaise within the port as a “Joint Operations Taskforce” sharing a joint control centre. UK authorities have also taken direct control of building security fences and other infrastructure in and near the Calais Port. 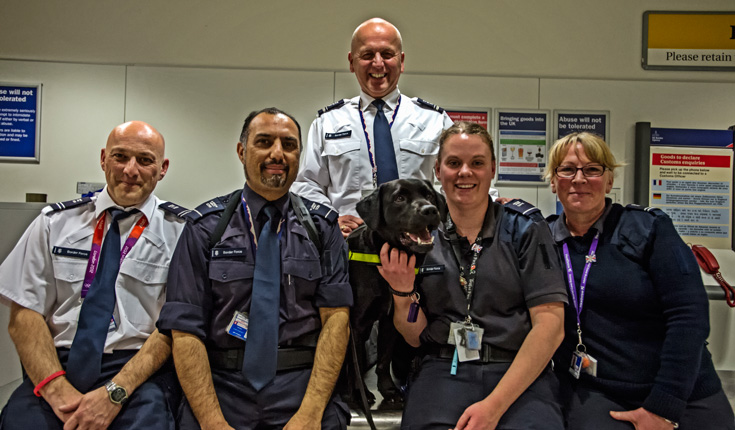 In the tunnel entrance site, border security is mainly the responsibility of Eurotunnel, which has a 300 strong private security army for this purpose. This force is funded through payments directly from the UK (as well as French) government.

Outside the Port and the Tunnel site, e.g., including on nearby roads and access points, border security is the responsibility of the French authorities, carried out by the PAF and other police forces (CRS, Gendarmerie), as well as by SNCF security and others in some locations. The UK contributes to the costs of these security forces under a succession of agreements.

Agreements around the Calais border are just part of the broader relationship of quid pro quo between the two states. The UK is clearly the main beneficiary of the juxtaposed control system. We can suppose that, as well as handing over money, it can also repay the “debt” to France in other areas where the two states interact. Also, according to Migreurop [link] the UK may have modified its asylum policies specifically in response to prompting by France.

Relations with other key actors